I wanted Scoot to have a very limited vocabulary. The odd word here and there. Well it made me and the editor laugh at least. Oh well... that's showbiz. Still, Scoot's few words are gone but never forgotten. When my kids are having potatoes, I lean over slowly and stare, wide eyed... and in Scoot's voice I say, 'Mmm po- tay -toh'. They laugh, but I'm sure they will have me sectioned eventually.

Posted by Unknown at 4:15 AM No comments:

Zoe on a date with an older man... and a tiger. 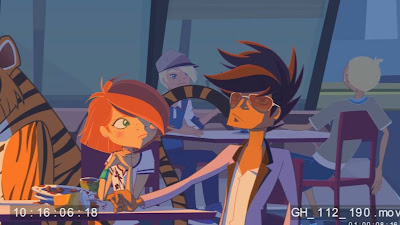 A nice frame from Groove High.
Posted by Unknown at 10:40 AM No comments:

Is that a foot?

Needless to say, this didn't get through S&P. A classic from the cutting room floor.

Damned nominated for best student film at the Baa's.

Posted by Unknown at 9:05 PM No comments: